If any of you lacks wisdom, let him ask of God, who gives to all liberally and without reproach, and it will be given to him. But let him ask in faith, with no doubting…

Lord, I certainly lack wisdom in so many things. I know You to be a loving and generous God, and right now I pray for the your guidance over my life. Soften my obstinate and rebellious heart, oh Lord, and where I am willful, show me Your will… When I am wayward, show me Your perfect way. I have nothing that you did not give me—please help me to remember this always.

In my last post I talked about how I’ve been reading the Book of James, and how James stresses the importance of having an active faith—being “doers of the word, and not hearers only” (James 1:22). I got a lot out of that, because I know all too well how easy it is to keep my Christianity in my head, and out of my daily life. 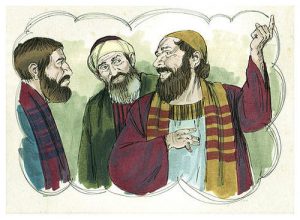 But James had a lot more to say on how Christians ought to live their lives. Another strong theme in this short letter is the importance of how Christians relate to other people. As I mentioned a few days ago, no one’s really sure to whom James was writing, but he certainly wanted to emphasise to his readers the importance of Christian charity, humility, fair dealing, and moderate speech—simple, every day stuff that I personally feel is as neglected today as it must have been back then.

He certainly had an egalitarian view with respect to wealth and power. In 2:1-4 he says:

My brethren, do not hold the faith of our Lord Jesus Christ, the Lord of glory, with partiality. For if there should come into your assembly a man with gold rings, in fine apparel, and there should also come in a poor man in filthy clothes, and you pay attention to the one wearing the fine clothes and say to him, “You sit here in a good place,” and say to the poor man, “You stand there,” or, “Sit here at my footstool,” have you not shown partiality among yourselves, and become judges with evil thoughts?

He is basically saying that if we are prejudiced against people by their appearance of poverty (and favour people because they appear wealthy), we are judging them, a practice that Christ Himself expressly forbade (see Luke 6:37).

I think it’s important to notice how closely James links being judgemental with the sin of pride. He picks this out strongly in chapter 4, where he quotes Proverbs 3:34—“God resists the proud, But gives grace to the humble”, and urges us to “submit to God” (v6,7). In verses 11 and 12 he goes on to say:

Do not speak evil of one another, brethren. He who speaks evil of a brother and judges his brother, speaks evil of the law and judges the law. But if you judge the law, you are not a doer of the law but a judge. There is one Lawgiver, who is able to save and to destroy. Who are you to judge another?

This is pretty strong stuff! In other words, if we start talking against other people, we’re taking the role of a judge and a lawgiver, a role that belongs to God alone.

Judging others is actually a more insidious and common sin than we realise. We might not know it, though. After all, it’s not as if we’re going around telling people that they’re sinners, and they’re not going to be saved, are we? At least, I hope we’re not.

But James sort of nails it back in chapter 2, where he talks about treating people differently, based on how they’re dressed. What he’s really talking about is prejudice, plain and simple – making assumptions about people when we don’t really know them. That kind of judging is all too easy to do, and James draws the line pretty clearly from there to putting ourselves in God’s position as judge.

Lord, help me to see all people as your children. No matter whether we turn to you or not, we are all your children, and I pray that I’ll be conscious of this in my treatment of others.

I’ve been reading the book of James recently. It packs quite a punch for being only five chapters long. It has a strong, sometimes pithy message on some of the practical aspects of Christian faith.

The author calls himself “James, a bondservant of God and of the Lord Jesus Christ” (v1:1, NKJV), and there’s not much else to indicate who this was. According to Wikipedia, the majority of scholars believe that he was the brother of Christ, but this is not certain.

In the same verse, James addresses himself to “the twelve tribes which are scattered abroad”, which suggests that his epistle is intended as general ‘wisdom literature’, rather than correspondence with a specific party. The general tone of the book seems to be in keeping with this.

The thing that has always struck me about the book of James is its intense practicality, and emphasis on active faith. In 1:22-25 it says:

But be doers of the word, and not hearers only, deceiving yourselves. For if anyone is a hearer of the word and not a doer, he is like a man observing his natural face in a mirror; for he observes himself, goes away, and immediately forgets what kind of man he was. But he who looks into the perfect law of liberty and continues in it, and is not a forgetful hearer but a doer of the work, this one will be blessed in what he does.

James clearly has little patience for people who profess belief in Christ, or even those who actually believe, but do not act on their belief. His famous statement in 2:20 that “faith without works is dead” leaves little room for doubt that faith requires action, and he gives numerous examples of this, both positive and negative. In 1:27, he says that “Pure and undefiled religion before God and the Father is this: to visit orphans and widows in their trouble, and to keep oneself unspotted from the world.”

Martin Luther, one of the great defenders of the doctrine of righteousness by faith famously declared James to be a ‘straw epistle’ (see History of the Christian Church, book 4, chapter 7). He felt that James was promoting righteousness by works, and even questioned whether his letter should have been included in the biblical canon.

With all respect to the great reformer, I’d suggest that seeing a ‘righteousness by works’ doctrine in James is to miss his point. James actually talks about faith a lot. In chapter 2, verse 23 he says that “Abraham believed God, and it was accounted to him for righteousness”. This is a clear assertion of righteousness by faith, but this follows a reference to Abraham willingly offering up Isaac as a sacrifice – an act of faith.

I think it’s clear that James was talking to people who believed in righteousness by faith. He was pointing out that faith is not passive or inactive. Going back to 2:14-7, we see the theme of charity again, where he draws on the absurd saying:

What does it profit, my brethren, if someone says he has faith but does not have works? Can faith save him? If a brother or sister is naked and destitute of daily food, and one of you says to them, “Depart in peace, be warmed and filled,” but you do not give them the things which are needed for the body, what does it profit? Thus also faith by itself, if it does not have works, is dead.

He does not say that the action saves the Christian. What he does say is that faith without action is no faith at all, just as having a charitable thought for someone is useless in comparison to the act of charity.

Faith without action is lazy and cheap. It achieves very little, and is actually worse than having no faith at all, because it lulls us into a false sense of security. Words about believing in Jesus Christ as our personal Saviour are nothing but nice-sounding noises when they are not backed up by a life lived according to God’s will.

True faith is active. It works to meet the practical needs of others. It ‘walks the walk’ as well as ‘talking the talk’.

James takes this concept a lot further when he talks about humility and the fair treatment of others. I’ll get into these in another post, but one thing I’m taking away from this study is the need to really live what I believe.

True faith doesn’t just happen in my head – it happens in my whole life.

This blog is about God, and my daily walk with Him. I study, and I pray, and I listen for His guidance. I want to write about this first and foremost because it’s the best way I can think of to be a witness for Him. I believe that His instruction in Matthew 28:19-20 calls all Christians to the work of spreading the gospel of Christ.

I believe that Jesus is the living Son of God, that he died for my sins, that He rose again, and that He will soon return to take His followers home. That’s my credo in a nutshell.

I also like to be in contact and commune with other Christians. I enjoy dialog with people of all faiths, and I hope to both give and gain strength by communicating and sharing faith.

My background is Seventh Day Adventist and I’m a member of an SDA congregation in Perth, Western Australia. As I said, I enjoy dialog, and I’m happy to discuss just about any issue that someone might raise, but it’s only fair to explain where I’m coming from. I’m a middle aged man with a family…

… and that’s enough about me. I want the focus of these passages to be on God, not me, and there’s just too many sentences with ‘I’ in them here already.

Lord, this idea of writing a bible-study and prayer journal online has just come to me. I pray that is is your will, and that it will further Your work. I pray that others will receive a blessing through seeing You in these words, and I also pray that it will help me in my walk with You.

Please guide what I write and say, and use me as you will.

To God be the glory.